Mr. Zhang Jianyu, Executive Director of BRI Green Development institute, noted that Chinese businesses are encouraged to integrate green development throughout the whole process of overseas investment and cooperation, which is an excellent step to accelerate green development both in China and internationally. He also complimented Chinese manufacturers like Midea on marching into the low carbon field and launching its own initiative proactively to combat climate change.

Midea’s “Green House” is a seamless integration of three smart and interoperable systems that encompass power generation, energy management and home management. The surplus energy can be transmitted to a storage system which not only can be used as a primary power source at night or in unfavorable weather conditions but can also help the entire neighborhood by sending electricity to other households.

With Midea’s advanced algorithms, a smart energy management system intelligently deploys and coordinates solar power generation, energy storage, charging and discharging, which can work in tandem with the MSmartLife system to power all smart home appliances in the house, including air conditioners, refrigerators, washing machines and kitchen appliances. The result is an energy-independent home that leverages a whole set of Midea’s state-of-the-art technologies to achieve NZEC and maximize energy utilization, in line with the company’s ambition to fully cut carbon from households. 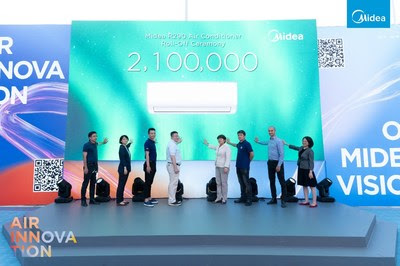 A ceremony was also held during the event to mark the production of the 2,100,000th Midea R290 air conditioner (AC), the first AC unit ever granted with Germany’s Blue Angel ecolabel.

Mr. Kristian Mao-Chang Wilkening, Project Director of Deutsche Gesellschaft für Internationale Zusammenarbeit (GIZ) expressed his appreciation for the company’s efforts and contribution to low-carbon development. He said, “For R290, Midea was the first manufacturer to obtain the Blue Angel certificate. This proves that Midea meets the highest environmental standards. Rolling off 2,100,000th units is impressive.”

Awarded by United Nations Industrial Development Organization (UNIDO) for its exceptional contribution to fighting against climate change, Midea has been spearheading a decade-long project to develop a mass-producible, efficient and reliable solution by replacing HCFC-22 with propane (R-290). Statistics from UNIDO in 2020 showed that Midea’s R-290-powered products have helped eliminate ozone-depleting potential and curtailed the equivalent of over 970,000 tons of CO2 annually.